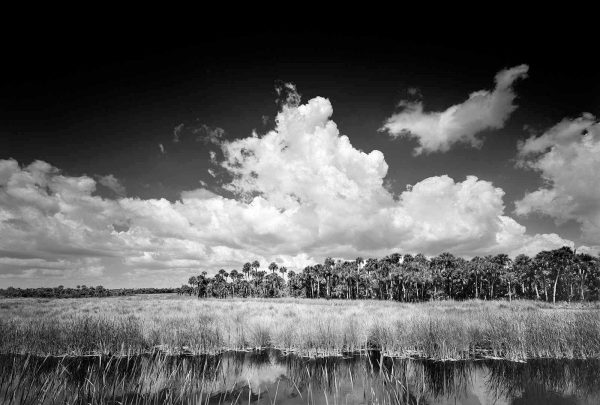 Click the image to view large
Photographic Story Big Cypress National Preserve, Florida – This photograph was one of the first photographs I took after my son was killed by a drunk driver. I really wanted a good shot of the grassy plains to express the feeling I had about the Everglades. The photograph was taken along Tamiami Trail. It was very dangerous because the tripod was set up near the side railing that is only a few feet from the edge of the highway. When the surge of wind from passing cars and trucks caused me to grab the camera for fear it would be blown over…well, that was much to close to traffic to be considered safe! I had attached an extra length of tubing to the tripod legs in order to get the camera up high. After focusing the camera, I raised it up to about 10 feet and took the picture. Out of the several shots I took, I chose this one to print because I liked the way the clouds have such a crisp line where they meet the dark sky. Tamiami Trail 1 is another interesting example of the delicate balance in the Everglades. Most of the grass in this 1986 picture was sawgrass. As I write this journal in 2000, most of the saw grass has been overcome by invasive exotic plants. Analog – Archival Silver Gelatin Photograph Clyde’s silver gelatin black and white images are created using an 8” x 10”, 11” x 14”, or 12” x 20” view camera. Clyde prints his images in his own darkroom on fiber-base paper in a limited edition. The photographs are selenium toned, then mounted and matted to current archival standards. His images come in sizes from 8” x 10” inches to 5’x 8’ feet. His love of art and nature is seen in the exceptional detail and more subtle textures of his photography. Each photograph is individually hand printed in the darkroom and will vary based on factors such as artist preference, chemistry and temperature. The image displayed on the website is a digital scan of the original negative and should be considered a representation of the printed version of the art.