Developing His Own Technique 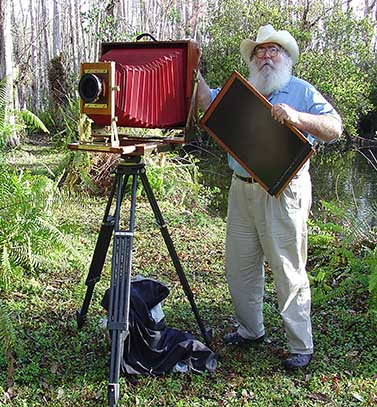 Beyond the aesthetic qualities of Clyde Butcher’s work, what distinguishes his landscape photography from that of other well-known photographers are the incredibly detailed mural-sized prints he produces on fiber-based silver gelatin paper. By carefully matching view camera format size to the subject matter photographed, Butcher can make prints measuring up to 5×9′ feet that allow the viewer to more fully embrace the breadth and scope of the landscape as Butcher experienced it in the field.

“I try to use the largest film possible for the particular subject I’m planning to photograph. So, if I have a huge, broad landscape, I use the 12×20″ view camera. If I am photographing something like the Ghost Orchid I use a 4×5″ view camera,” explains Butcher, who most often works with an 8×10″ view camera, but has a host of smaller and larger format view cameras. Butcher began making large prints as early as 1968. It has been in the last 20 or more years that he refined and perfected his technique of producing mural-sized prints.

CLYDE’S TECHNIQUES & EQUIPMENT
Film Cameras
Clyde uses a variety of large-format view cameras ranging in size from 4×5” to 12×20”. Below, you can see how Clyde maneuvers his 8×10″ view camera as he, chest-deep in the Sante Fe River, positions himself to get the shot.

View cameras were first developed in the mid-1800s. A film holder located at the back of the camera holds a single sheet of film. The lens forms an inverted image on a frosted glass screen. Clyde sees an up-side-down image when he frames and focuses the shot. A light-tight, accordion-pleat, flexible bellows enclose the space between the lens and film. Unlike most cameras, the film holder and the lens can move in various ways relative to each other. Clyde can adjust the “shift” and “tilt” axis of the lens to control focus, depth of field, and perspective. The lens is attached to a shutter that controls the time of the exposure. A tripod is usually used to support the camera, especially during a long exposure.

Lenses
Clyde uses a variety of interchangeable photographic lenses ranging in size from 35 mm to 1100 mm. Most of his lenses have a 90 – 120-degree angle of view. Some lenses which he uses in Florida are wide-angle – useful in dense, lush areas like the Everglades. The longer lenses are useful for western scenes, where there is more space between geological features. On occasion, he has used telephoto lenses such as the 1500mm lens on a medium format camera to capture wildlife images (such the Whilden’s Pond and Big Cypress Gallery series). These are relative to the format of the film being used. A 210mm lens is considered a telephoto lens on a 4×5″ but a 210mm lens would be an extreme wide-angle lens on a 12×20″ camera. 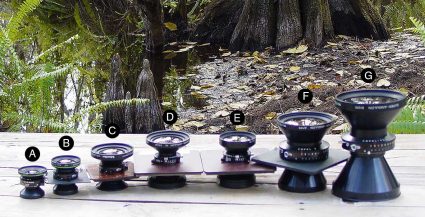 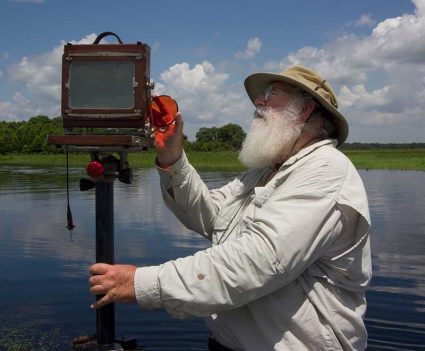 Filters
Clyde uses a variety of filters including red, orange, yellow and yellow-green. The filter is attached to the outside of the lens. His most often used filter is orange which adds contrast to the sky and clouds.

FILM PROCESSING
Each photograph that Clyde takes is captured on an individual sheet of film. An 8×10″ camera uses a sheet of the film of the same size. The film needs to be processed in a chemical developer.

Clyde uses the tank processing method to develop his sheet film. Sometimes he stores negatives of photographs that he’s taken for months before developing them. The film developing process is done in complete darkness to protect the film from light exposure. Individual sheets of film are removed from the film holder and inserted into a metal film hanger. The film is notched in one corner so that Clyde knows the emulsion side. This is important because the 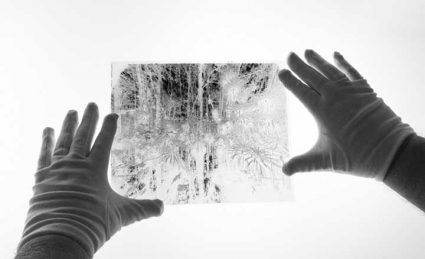 film can be ruined if the emulsion sides of two pieces of film touch.  The film is submerged in a tank filled with processing solution and then agitated for approximately 7 minutes. The negatives are then submerged in a tank of stop bath solution and then into a fix solution.  After processing the film is rinsed in water for an hour then emerged in a solution of Photo-flow for 30 seconds to prevent streaking. The negatives are hung to dry overnight. 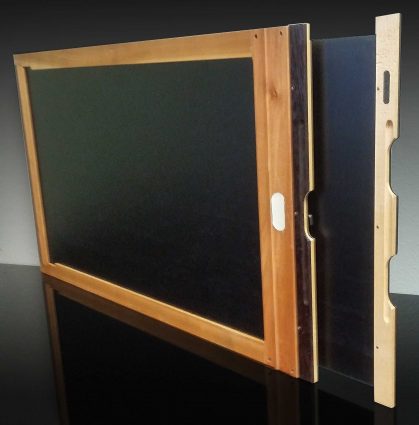 This 12×20″ light-tight film holder needs to be preloaded in the dark. Each holder carries two sheets of film.  Clyde will prepare several of these before heading out to shoot. After being inserted into the back of the camera, the “dark slide” is removed. Clyde takes his shot, then reinserts the dark slide – now he flips over the film holder to ready the second sheet of film. Typically, because the opportunity to capture an image is time-sensitive, he will shoot a maximum of two shots. Clyde is a master of photography and therefore knows the exposure time and aperture settings, so he doesn’t need to bracket. The second shot is simply for quality control. 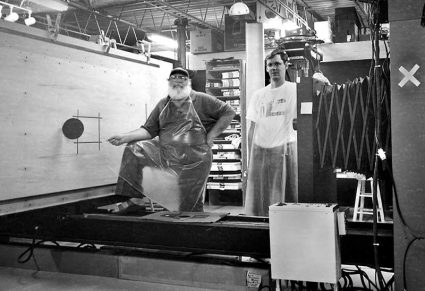 DARKROOM PROCESSING
Clyde’s printing room is filled with a unique collection of enlargers. He has a 5×7″ and 8×10″ Elwood, and an 8×10″, 10×10″ and 11×14″ Salzman. He removed their heads and replaced them with variable contrast Aristo heads. His “glory” enlarger is “Big Bertha”, a 26×36″- 16-foot horizontal rail copy camera that was given to him by a printing company. This beautiful piece of equipment was on its way to the dump since computers are taking over the job of copy cameras. It was offered to Clyde for free, all he had to do was pick it up. That was easier said than done. “Big Bertha” weighs around 2,000 pounds! After setting up “Big Bertha” in the darkroom, Clyde had a custom 12″x 20″ variable contrast Aristo head designed for the copy camera, and it has now become a horizontal enlarger. 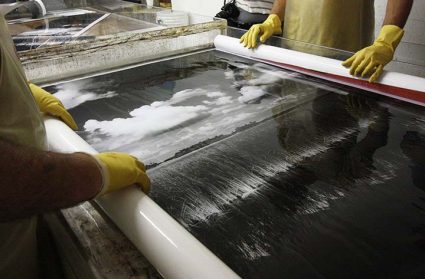 DARKROOM PROCESSING
Clyde gives a new meaning to the term, “necessity is the mother of invention.” Throughout his life, Clyde has overcome challenges by developing his solutions for achieving the desired result.

From creating the mural-size darkroom prints, for which he is famous, to embracing the digital world of photography, when the physical challenges of carrying the view camera into the swamp became daunting, he has overcome obstacles with ingenuity.

“The first time I did a huge print I had to wash it in the swimming pool, laughs Clyde, “I’m sure the chlorine wasn’t too good for it.”

Eventually, Clyde built 4×5′ foot sinks and developing trays out of Plexiglas. The trays run down the center of the 100-foot long chemical room and allow him to develop 40×60″ prints. Just moving the huge prints from tray to tray was a challenge – Clyde’s solution – an assistant stands on one side of the sink, and Clyde stands on the other. They wrap each end of the print around pool noodles, then pass the paper back and forth through the chemistry: rolling it and unrolling it again and again through the developer, stop, two fixes, hypo-clear with selenium, and an hour wash before it is hung to dry.

To accommodate the washing of several large prints, he 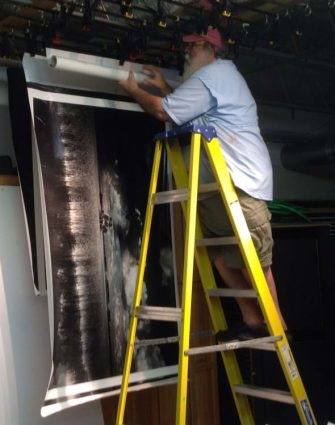 designed and constructed his own 40×60″ inch vertical washer. After the print has dried, it is stored flat with weights to reduce wrinkles.

For the final presentation stage, Clyde uses a vacuum hot press to mount his prints on museum board and uses metal frames to hang the prints. “We do our mounting with heat and vacuum,” explains Butcher. “We mount our own prints because fiber isn’t flat like RC paper so you can have wrinkles. We don’t recommend that people mount their own prints. It can get very frustrating at times after you have done all this complicated processing then try to mount the print and it wrinkles. Every time you handle one of these prints, it’s a disaster waiting to happen,” he adds. 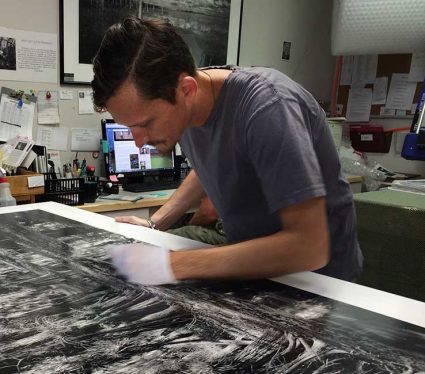 Butcher has created a specific numerical printing system to help maintain a more organized and efficient inventory of images. Each photograph is hand-printed by Butcher in his darkroom using fiber-based paper, and selenium toned for archival purposes, then mounted and matted to current archival standards. The photograph is then hand spotted with archival ink to remove any dust spots, signed, and issued a limited-edition number. As the number of prints available in each limited-edition becomes fewer, the price of the remaining prints increases.

“I want people to view my work up close,” says Butcher of his desire to produce very large prints. “Most people don’t know how they see. You really only ‘see’ about five to seven degrees and perceive 120 to 180. When you’re in nature, you’re scanning from the log to the tree to the bird to the water, and your mind puts in this perception of what it feels like. And sharpness is the whole key to it. I mean, I can make a 12-foot print from a 35 mm negative, and if you stand 40 feet away it would look fine, but if you stand three feet away it would look pretty bad. So if you have a large image with a lot of detail, the detail has to be very sharp. Your eye likes to see what’s there.” 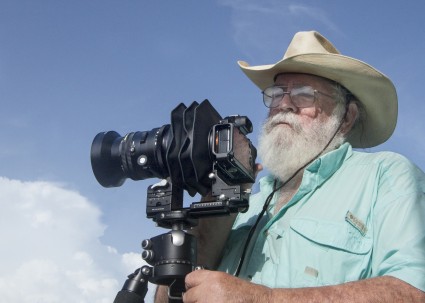 The Cambo Actus allows him to create images using swings and tilts, rise and falls, and shifts, just as he has been able to do with his large-format view cameras. The Cambo Actus with the Sony camera also allows him to use a variety of lenses. Currently, he uses the lenses listed below: 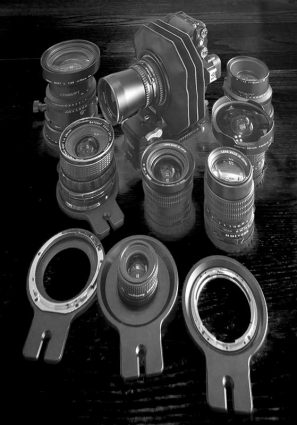 Clyde also uses his Sony A7R without the Cambo Actus attachment, those lenses are listed below:

Clyde manipulates the image on the computer much as he does in the darkroom using a variety of imaging enhancing software, then, he prints the image on an Epson Stylus Pro 11880 printer. He uses archival Ultrachrome K3 ink and prints on archival Harman Hahnemuhle paper. The limited-editon print is then mounted and matted to current archival standards.