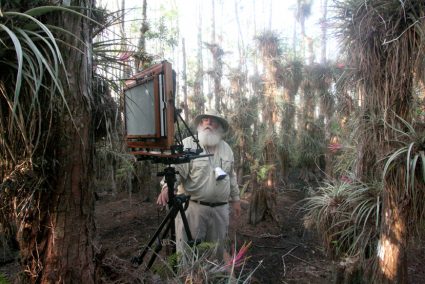 Clyde Butcher will be giving two lectures on January 24, 10:00 am and 1:00 pm about his Everglades adventures. Before and after lectures he will be available for a book signing.  His exhibition ~ America’s Everglades will be on display as part of the Refuge’s 75th-anniversary celebration. The exhibit, America’s Everglades, will be on display through February 5, 2020, at Ding Darling in Sanibel, Florida. This expansive wilderness collection represents the many years Clyde spent exploring the remote regions of the Everglades, experiencing its changes. It is a diverse and complex territory which reveals its beauty in many ways. His photographs reveal wild and natural places where few humans have ventured, and the images capture remarkable solitude and wonder. The Everglades is one of the largest wetlands in the world and the largest subtropical wilderness in the United States. Shaped and sustained by seasonally flowing shallow water, the Everglades is home to dozens of threatened and endangered species, massive flocks of wading birds, recovering populations of alligators, crocodiles, and millions of insects. Exceptional for its diverse combination of rich plant and wildlife communities, varied habitats, and remote wilderness, the Everglades has perhaps most importantly become a beacon for conservation.  “Clyde Butcher’s remarkable photographs give us access to nature we rarely see or experience. They not only reveal the intimate and majestic beauty of the Everglades–and the need to save this fragile environment–they also remind us of the abiding kinship we mortals share when we work together to preserve these magnificent places. Butcher’s art is a national treasure.” –Ken Burns, Emmy Award-winning filmmaker
+ Google Calendar+ Add to iCalendar