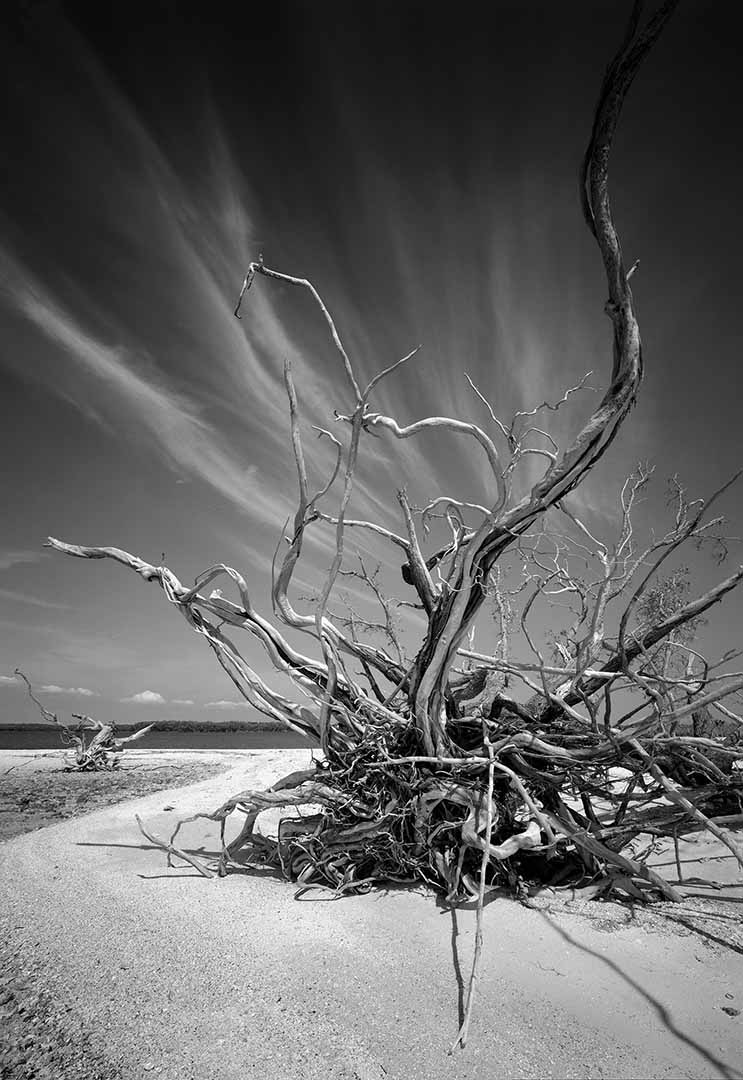 [click image to view larger]
Hurricane Andrew deposited many dead trees onto the beaches of Ten Thousand Islands in the Everglades. By the time I photographed them years later, the trees were bleached white by the sun, creating beautiful white sculptural pieces that lay as monuments attesting to the strength of this storm. As I set up my camera, I wished I had some clouds in the sky to help the composition. Strangely, just as I finished setting up, the clouds seen in this image appeared. When I finished photographing, they disappeared. The Positive Effects of Hurricanes While hurricanes have a destructive legacy in most regions where they occur—including eroded coastlines, toppled vegetation, and sand-smothered oyster beds—their winds and rainfall do have positive effects in the Everglades. As hardwood hammocks are nearly impervious to wildfires, only the most intense winds will topple an established canopy enabling a diverse array of native wildflowers, grasses, vines, and ferns to reestablish themselves. Seeds of endangered native air plants and orchids, the size of a speck of dust, are spread to new areas with high winds. Heavy rains from these storms enlarge fish and amphibian habitats and populations, feeding and fueling a seasonal supercolony of wading birds. Life in the Everglades has not only endured hurricanes for centuries but has learned to thrive in response to them. Indian Key 5 was taken with a Deardorff 8×10 camera on T-Max 100 film. This photograph is hand-printed in Clyde’s darkroom on fiber-based paper, selenium toned, then mounted and matted to current archival standards. The photograph is a limited edition and signed by Clyde. Camera settings: f/45 | 90mm Schneider Super-Angulon XL lens | orange filter | 1 second Disclaimer – Cropping, contrast, and image density may vary. To learn more about the darkroom printing process, click here.
Add to Favorites
Share
Reviews