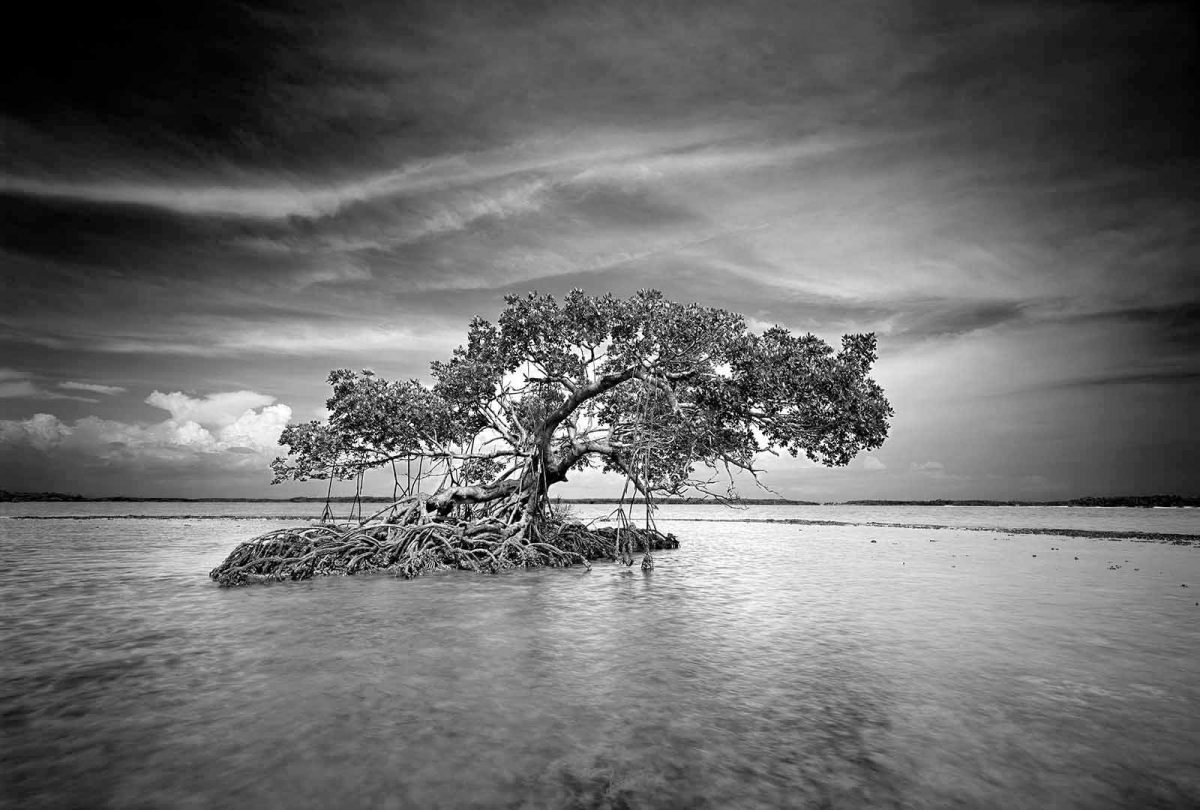 [click image to view larger]
Mangroves are a wondrous plant. Imagine a tree that survives in saltwater! I am constantly amazed by their sculptural beauty and the important part they play in the ecosystem of the world. I wanted to photograph this mangrove from a high position, so we pulled our boat up onto the beach and I set up my tripod on the bow of the boat. It was tricky because the boat refused to sit still; it kept bouncing around in the waves. I was having difficulty taking the photograph, so my wife, Niki, tried to steady the boat. I took several shots but finally managed to get one that had no movement. Ten Thousand Islands National Wildlife Refuge At the southwest edge of the Everglades lies one of the world’s most productive and biodiverse estuaries, the Ten Thousand Islands National Wildlife Refuge. This coastal wetland, spanning 35,000 acres, is a labyrinth of mangrove islands. Mangroves contribute to a rich source of nutrition in the form of leaves, bark, and twigs—debris that becomes colonized by microorganisms and eaten by small fish, shrimp, crabs, and their larvae. The plant’s ability to trap and accumulate debris creates new islands and habitat for other vegetation and allows juvenile creatures to flourish. The mangroves, with their sprawling, submersible root structures, offer a hiding place to a diverse array of inhabitants from both larger predators and the pounding destructive forces of seasonal storms. These sturdy barriers are essential in protecting the coastline from tidal surges and pounding waves, as hurricanes and tropical storms roll through. Indian Key Pass 6 was taken with a Deardorff 8×10 camera on T-Max 100 film. This photograph is hand-printed in Clyde’s darkroom on fiber-based paper, selenium toned, then mounted and matted to current archival standards. The photograph is a limited edition and signed by Clyde. Camera settings: f/45 | 90mm Schneider Super-Angulon XL lens | orange filter | 1 second Disclaimer – Cropping, contrast, and image density may vary. To learn more about the darkroom printing process, click here.
Add to Favorites
Share
Reviews