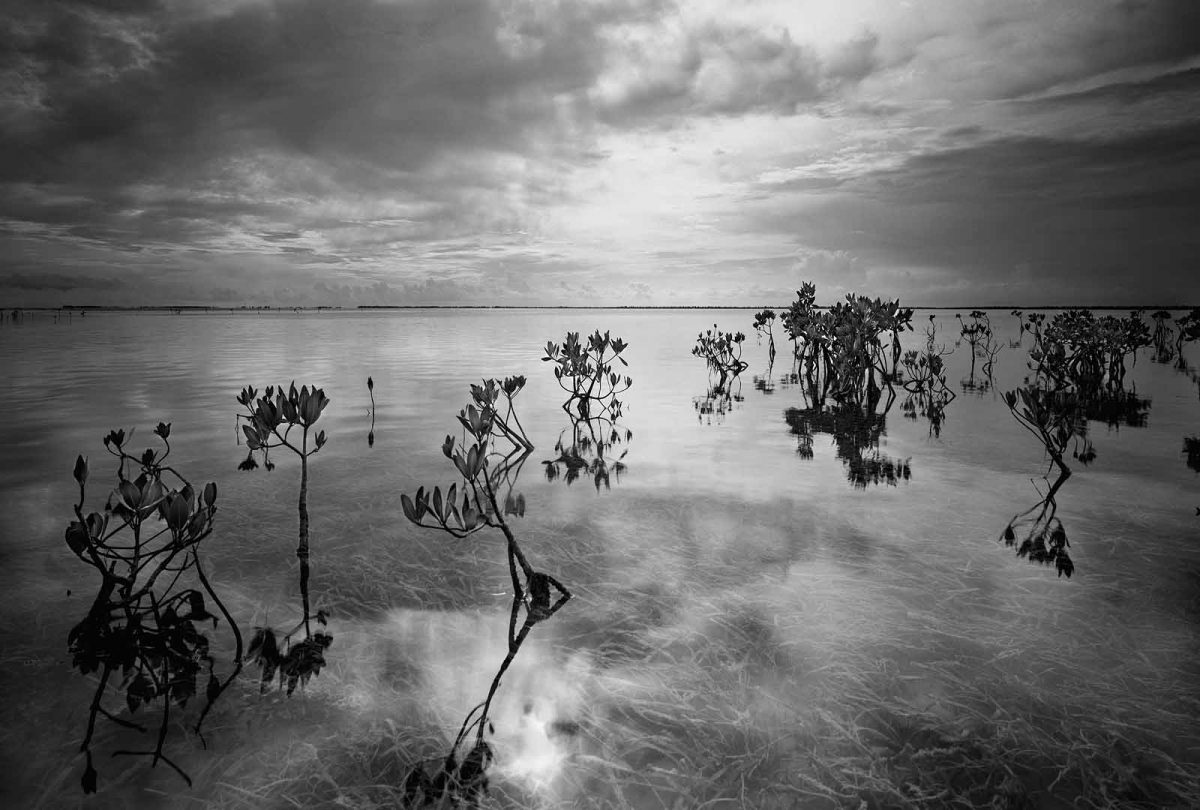 [click image to view larger]
I spent a day in Biscayne Bay on a photo trip. Late in the afternoon, the sun began to break through the clouds creating fantastic patterns of light that sprinkled across the water. The area was very shallow, so I hopped out of the boat to set up the camera but quickly found myself waist-deep in muddy sand. I wallowed over to the place I wanted to photograph while Niki slowly maneuvered the boat as close as she could get, and handed me my camera gear. By the time I finished taking the picture, I was stuck. In an attempt to free myself, I ran my hand down my leg, creating a space for air in the mud to break the suction. I escaped, but the mud claimed my wedding ring. Now I like to tell people that “Dare’s gold in dem dare mangroves!” Biscayne Bay Where a fringe of mangroves meet the northern keys and a portion of the third-largest coral reef in the world lies sheltered, there is a protected shallow estuary where clear waters allow lush seagrass meadows to flourish. Key Biscayne Bay occupies a limestone depression just oﬀ southeast Florida mainland and is a productive ecosystem where plants, sun, and translucent waters combine with nutrient-rich freshwater runoﬀ to produce food and shelter for over 600 native fish, 20 threatened and endangered species, and a myriad of neo-tropical water birds. Here, the calm, clear warm waters of this vast bay give one a sense of what conditions might have been like just before the Florida platform emerged from its marine birthplace to become the Greater Everglades as we know it today. Linderman Key was taken with a Deardorff 8×10 camera on T-Max 100 film. This photograph is hand-printed in Clyde’s darkroom on fiber-based paper, selenium toned, then mounted and matted to current archival standards. The photograph is a limited edition and signed by Clyde. Camera settings: f/45 | 120mm Nikkor SW lens | orange filter | 3 seconds Disclaimer – Cropping, contrast, and image density may vary. To learn more about the darkroom printing process, click here.
Add to Favorites
Share
Reviews