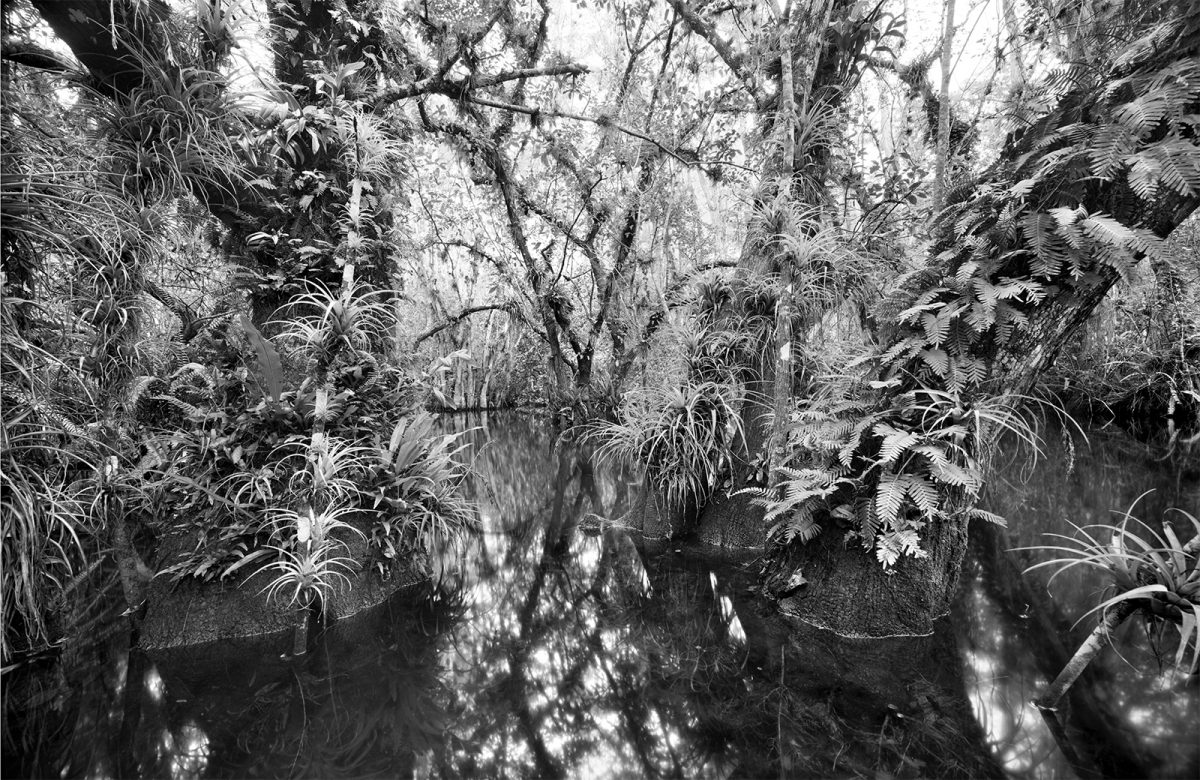 [click image to view larger]
We spent the summer of 1993 building our gallery in the Big Cypress National Preserve. The following summer, we had time to explore our “backyard” for the first time. Niki and I discovered that beneath the waters of this cypress swamp lie several feet of thick, rich muck—up to 80 inches deep in places. We learned the hard way how deep the muck was in this area of the Everglades. I made several attempts to get this photograph! Day after day, I set up my camera and then developed the film only to find that the camera had moved during the exposure. In an attempt to stabilize the camera, I weighted my tripod with concrete blocks, letting it sink and settle in the muck for days, to no avail. After two weeks of trial and error, I realized it was my movements that shifted the muck, moving the camera. Solving the mystery, I swam to the camera, clicked the shutter, and floated upon the water during the six-minute exposure. Success! Loosescrew Swamp | Wet Season Florida’s seasons revolve on the presence and absence of one precious resource—water. Throughout the Everglades, the amount of surface water determines the season. The summer is wet due to the return of seasonal rains, hurricanes, and tropical depressions flooding the landscape. Seasonal rains typically occur daily and drop a fraction of an inch to several inches regularly. However, storms are capable of transforming a dry landscape into a shallow sea of freshwater that extends for miles overnight. The saturation and flooding that is characteristic during this time of year allow this marvelous system to regenerate its primary food sources. These food sources include periphyton (vital blue-green algae), fish, frogs, and other invertebrates that will eventually become food for the larger animals that call this part of Florida home. Loosescrew Swamp Sanctuary 2 was taken with a Deardorff 8×10 camera on T-Max 100 film. This photograph is hand-printed in Clyde’s darkroom on fiber-based paper, selenium toned, then mounted and matted to current archival standards. The photograph is a limited edition and signed by Clyde. Camera settings: f/45 | 72mm Schneider Super-Angulon XL lens | 6 minutes Disclaimer – Cropping, contrast, and image density may vary. To learn more about the darkroom printing process, click here.
Add to Favorites
Share
Reviews