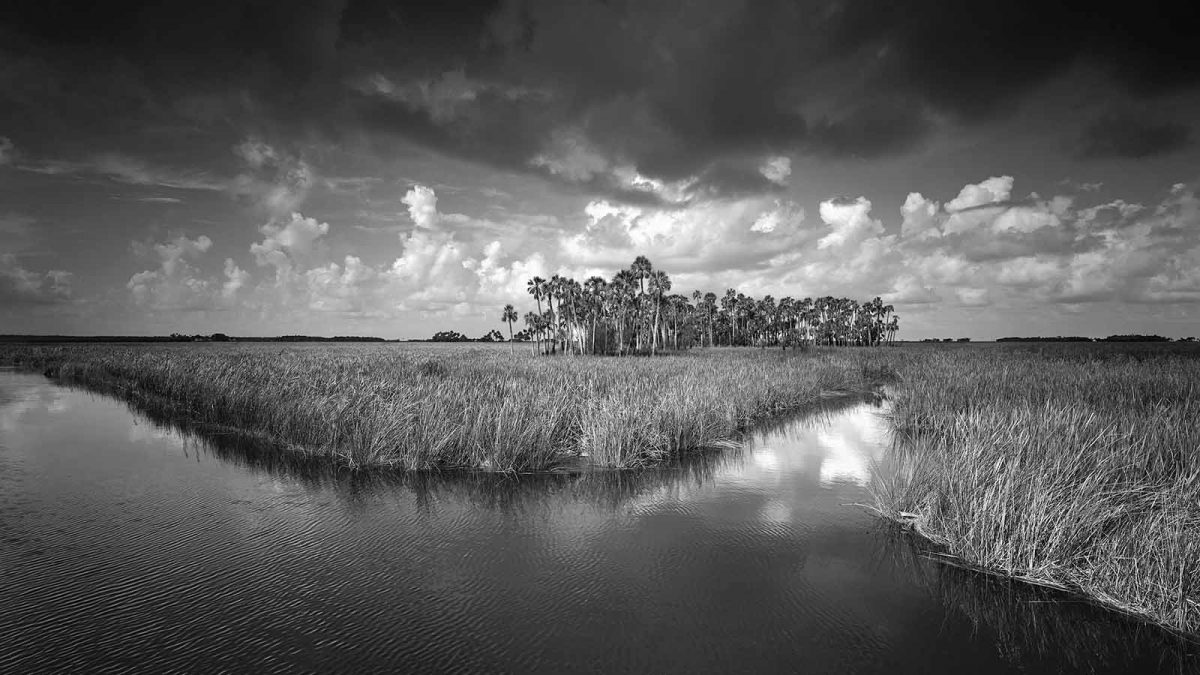 [click image to view larger]
Chasahowitzka National Wildlife Refuge, Florida – Many people told us about a beautiful secret place in north Florida. the name of the place is a tongue twister: Chasshowitzka River. When we decided to do some photography along the northwest coast all we could remember was the name of the place had a “Z” in it. We eventually found the location, and true to the stories people had told us, it is a beautiful place. We launched our pontoon boat near the freshwater spring and spent a week on the river photographing both the freshwater area and the brackish area. Seven Cabbage Cut is taken out in the wetlands at the mouth of the river. The photograph is unusual because it was taken from our boat. I saw the scene and knew it was what I wanted to photograph. We anchored the boat and I climbed over the edge, down into the saw grass, then immediately sunk into the muck up to my waist. Setting up the tripod in the muck would be impossible. With difficulty, I climbed out of the muck and got back into the boat to consider my predicament. I knew I wanted to photograph this scene, but how? The solution to my problem was to put out four anchors, one at each corner of the boat. They helped stabilize the boat, although we did sway slightly with the current. I set up my 12-foot ladder, tripod, and camera on the bow of the boat. After getting my focus adjusted and my film in place, Niki went to the stern of the boat and watched for the moment the boat stopped swaying, at which time I took my photo. I took seven photos that way and only one negative was without movement.  It was amazing that I managed to get one good negative under those conditions. At a later date, I became involved with the Florida Aquarium in Tampa and was pleased to find out that the ecosystem on which the aquarium is based is that of the Chasshowitzka River. Seven Cabbage Cut was taken with an 8×10″ camera on Tri-X film. This photograph is hand-printed in Clyde’s darkroom on fiber-based paper, selenium toned, then mounted and matted to current archival standards. The photograph is a limited edition and signed by Clyde. Camera Settings: f-45 | 120mm lens | 1/8th second | orange filter Disclaimer – Cropping, contrast, and image density may vary. To learn more about the darkroom printing process, click here.
Add to Favorites
Share
Reviews