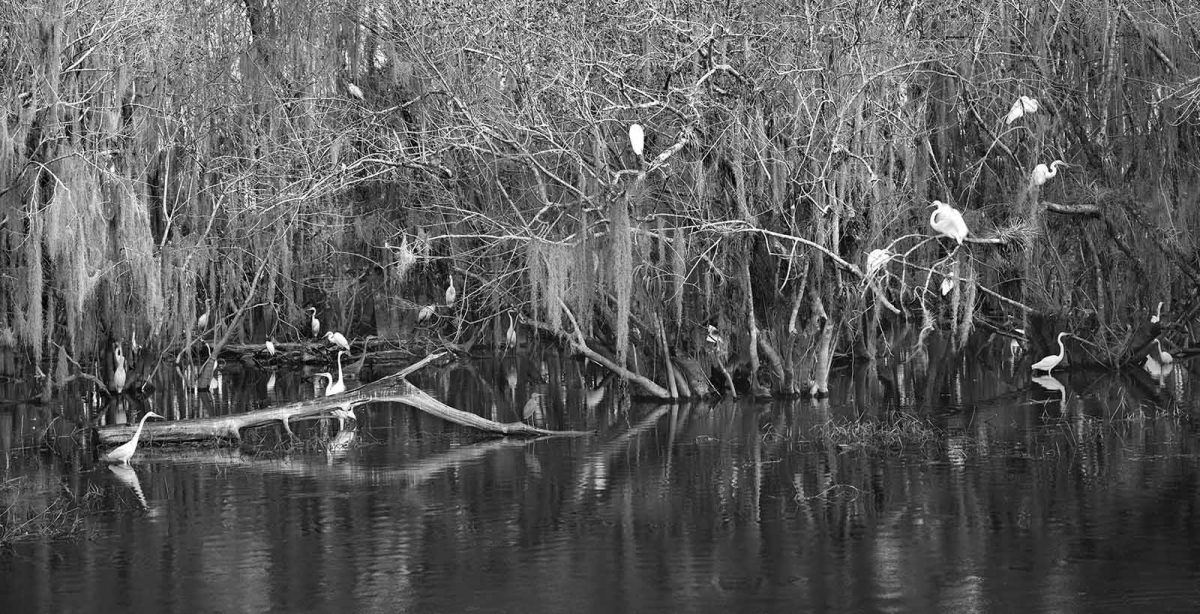 [click image to view larger]
Taking photographs of birds with a large format view camera is difficult. Setting up the camera can take as long as ten minutes, and birds don’t often wait around to have their pictures taken. However, when Clyde took this photograph, the bird population was abundant. They were so busy eating they didn’t mind his intrusion. Snowbirds of the Swamp Florida is known for its wealth of birds, yet many of the birds are seasonal. Each year, during the fall and winter, flocks of great and snowy egrets converge on the Everglades accompanied by great blues, little blues, and green-backed herons, wood storks, roseate spoonbills, ibis, double-crested cormorants, anhingas, and other smaller birds. These birds arrive at the beginning of the dry season, allowing their mating and nesting season to take advantage of the multitude of fish trapped in shrinking water holes. By early spring, the dry season is at its height. The birds leave Florida, returning north or south until the following winter. Skillet Strand was taken with a Deardorff 8×10 on T-Max 100 film. This photograph is hand-printed in Clyde’s darkroom on fiber-based paper, selenium toned, then mounted and matted to current archival standards. The photograph is a limited edition and signed by Clyde. Camera settings: f/22 | 210mm Schneider Symmar lens | 1/30 second. Disclaimer – Cropping, contrast, and image density may vary. To learn more about the darkroom printing process, click here.
Add to Favorites
Share
Reviews